Nick Helm was 25 years old when he gave up a wood turning career in Skipton for a crack as a golf cameraman on the European Tour. His first event was at the Portuguese Masters and earned him the nickname Nick “The Pie”. Working a mammoth 285 days in a row in his first year. 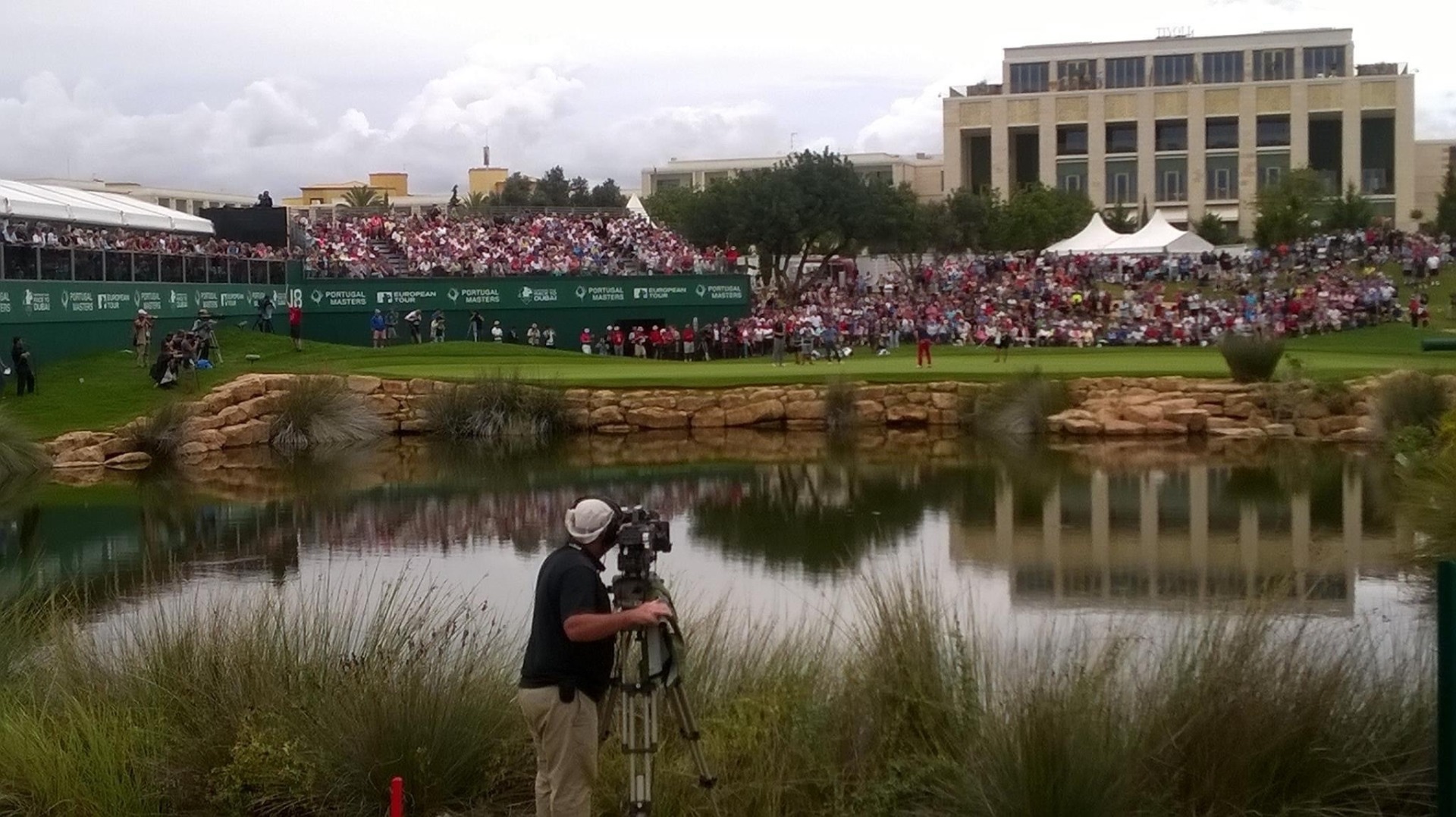 The televised world feed was very different to today. The cabling took a few days to lay prior to the event, with 100 people on every job. The TV World feed and satellite links took a massive 80 kilometres of cable to link up every truck to camera. 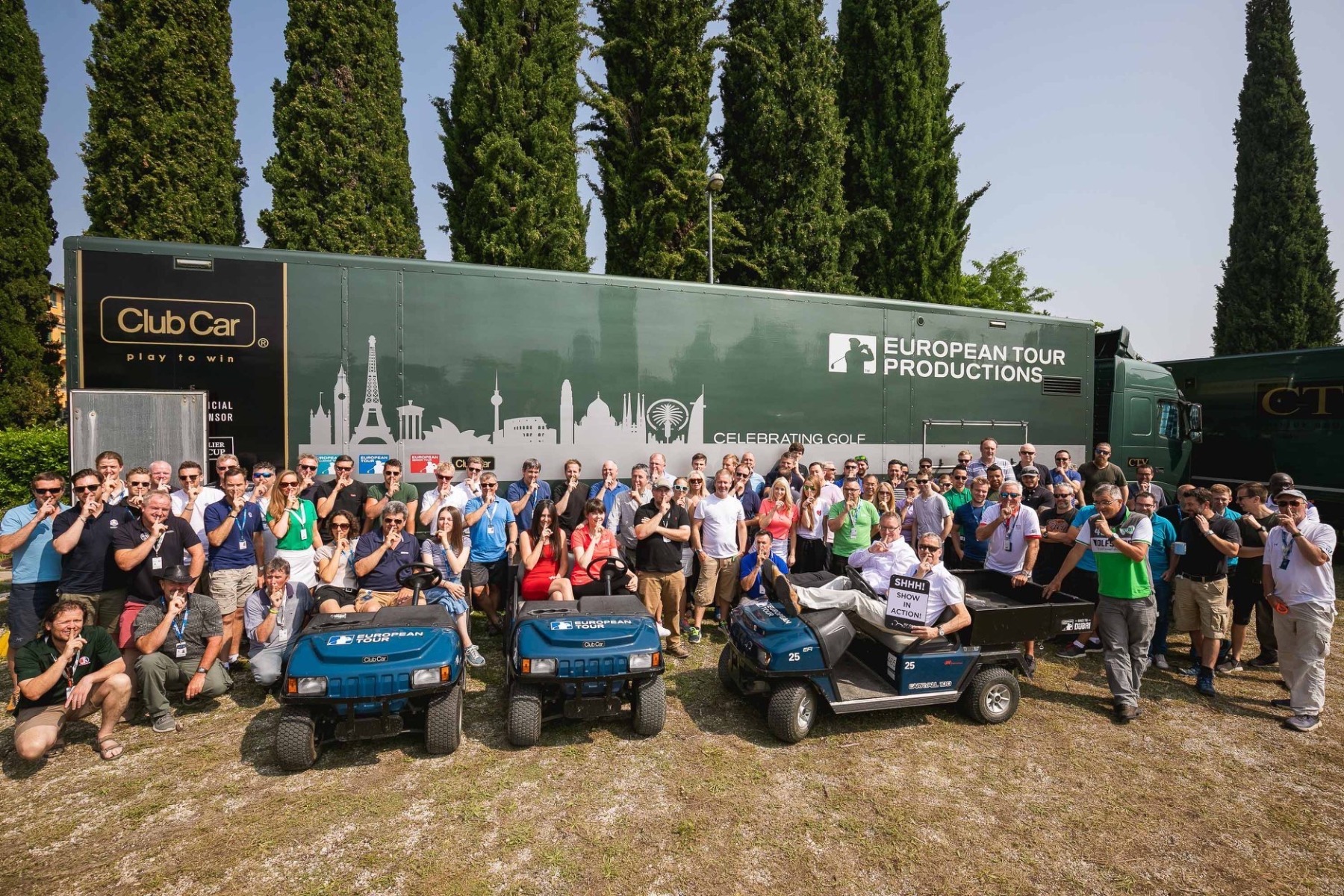 "At one event I was strapped into a helicopter. They had taken the doors off and I was standing on the skids outside. The pilot was ex-military and we had to swoop low over the fairway taking shots of the course layout. It backed onto the driving range. Before we knew what was happening the players were peppering us with golf balls. They were getting closer and closer in the viewfinder. After that it was time to make a hasty exit. These days it's all about drones and much safer".

The present day has a World feed going out to 52 countries all using fibre cables.

When Helm is on the course doing Live TV feed to the world, he can choose from either the Sky commentary, Golf channel commentary, or World feed commentary.

"You are always listening to the director and producer, talking to you at the same time. There can be up to 5 people in your ear. If they are talking about the windy conditions, then I prepare a shot of the trees moving or the flag waving. After doing this job for 20 years you get to know what each producer wants. You listen out for your name and camera number. "Give me a close- up pie man, camera 6”, sometimes there is more than one Nick on the job”.

At any European Tour event there are usually 14 TV towers behind the greens. These are normally 2-6 meters high with the camera on the platform. In addition, there is always a few Radio Frequency cameras walking up and down following the main groups on the fairways. Add in a high camera doing the ball follow, a “Slow- Mo” camera, and a couple of studio cameras and you have about 20 cameras in all.The crane cameras always give great shots and can move up to two meters in the air as a result of the blustery conditions. Sometimes they are as high as 65 meters. You need a strong bladder to work up there. Above all it's always safety first on the Tour"

Helm was the cameraman at the Brish Open at Carnoustie when Jean Van Der Velde threw away winning the British Open. He famously only needed a six on the last hole to win. The Frenchman went into the water and the long grass carding a triple- bogey seven and outright victory. He eventually lost in a 3- way play off.

"The presure that I was under to not miss the ball follow. The first time you see a ball sometimes is when your live and millions of people are watching, no second chances. That was pressure that day" 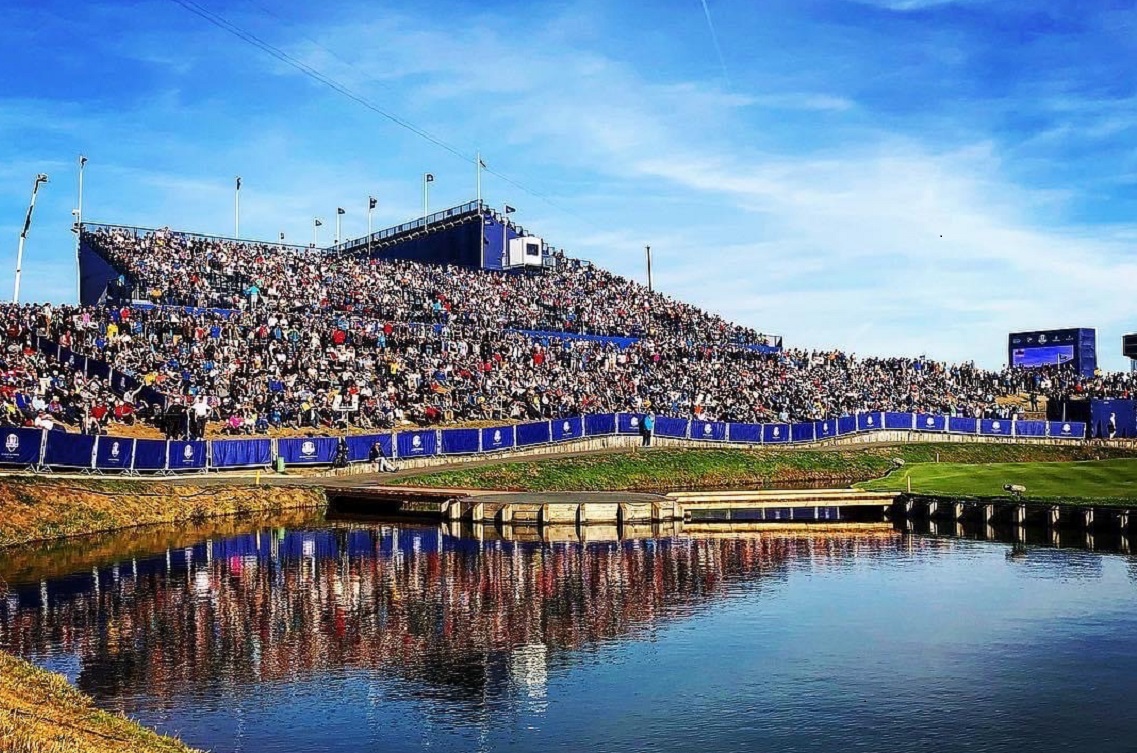 At the Ryder Cup all the cameras from ESPN and NBC plus the world feed are all together all over the courses. "This is a logistical problem because they all have their own feed as they don’t share the same pictures as us. Often you are stood on a shared tower with 3 cameras. Luckily we all get on well with the Americans".

"It’s incredible you are experiencing the same thing as the players, without the pressure, the hairs on the back on you neck stand up ”

“I was standing at the back of the par 3 second green, with a live feed on the Radio Frequency camera for the pro-am competition. This was the day before the Ryder Cup started. David Ginola struck the ball and I started the ball follow with my colleague holding the boom sound mike next to me. The ball started to get closer and closer, and bigger and bigger and bigger in the viewfinder. I started to warn everyone that the ball might hit someone. At the last minute I put the camera down to protect the 40k lens.

"The ball hit me right in the eye. I asked the lady next to me, "Is my eye was still there?" I genuinely didn’t know. Five minutes later I was in a tent having stitches and nursing a fractured skull. Pretty lucky really, I could have lost my eye".

Nick Helm is now a senior golf cameraman on the European Tour, with nearly 1000 events to his name.